Mid-flight, a familiar voice on the PA system announced that a young cellist was onboard the flight and that he would play a concert, requesting anyone interested in listening to come to the area around row 50. That familiar voice making the announcement was none other that The Right Honourable Jean Chretien, former Prime Minister of Canada!

Anna Buchnea, General Manager, Air Canada Sales Communication and Support who was onboard the flight reported that reaction from the passengers was one of amazement as Stéphane proceeded to play several Bach pieces, making a memorable flight for all! 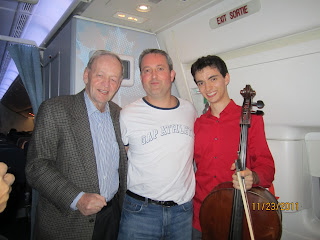 One intrepid blogger, Jorga, even snapped a picture of the unlikely occasion.