Back in Vancouver for its second year, Debts is a creepy and adventurous evening that combines the ingenuity of site-specific theatre with the thrill of a haunted house. Unfolding in the Victorian-era rooms and grounds of the West End's Roedde House, the work is a loving tribute to the horror genre, mixing equal parts Poe and 80's slasher film into an undeniably cool and memorable experience. 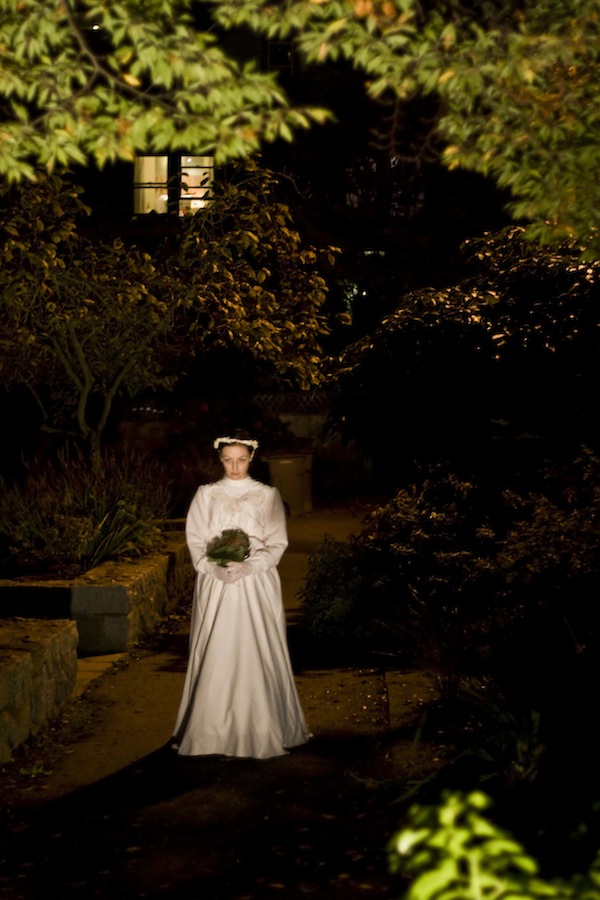 The show's audience capacity is an intimate 15 brave souls, whose journey begins outside in the mansion's gazebo. Inevitably, the audience is soon joined by five archetypal teenagers: alpha male, virgin, geek, party girl, and burnout. The five have gathered to crash a wedding taking place at the looming house. By way of exposition, we learn that it is inhabited by the bizarre, reclusive Ushers, whose father (now deceased) was rumoured to have been the devil himself.

Another archetype, the spooky butler, interupts their gathering, welcomes them to the ceremony, and warns them that while they have full range of the home, they are asked not to enter any of the upstairs rooms, especially the nursery (we all know where this is going…)

What follows is a 75 minute journey where we follow the various characters from room to room and about the perimeter of the 1893 home. Along the way we are further introduced to the bizarre Usher family: the domineering undertaker mother, the chemically inclined eldest son, the radio obsessed youngest (whose eerie broadcasts provide soundtrack to the events), and the daughter, Margaret, a bride whose corpse-white face and sunken eyes would seem incapable of blushing. It is an intensely atmospheric and intimate experience that makes brilliant use of the space. The audience variously find themselves shoulder to shoulder with the performers, leaning out of windows to observer events taking place outside, or racing from room to room at the behest of a guide.

Under these circumstances, it would be simple for director and playwright Mack Gordon to have gone for cheap scares with things popping out to surprise the audience; fortunately, this is limited to one or two occasions. Instead, the horror stems from suspense. Like The Shining or Rosemary's Baby, the play uses narrative and atmosphere to slowly increase the tension and the sense of unease as the sinister intentions of the Ushers are gradually unearthed.

Debts is truly an ensemble work, and the seamless collaboration of its 10 actors is instrumental in weaving the aura of creepiness attending it. Particular standouts included Brett Harris, who brought an unnerving enthusiasm and earnestness to the radio-obsessed youngest Usher, and Fred Galloway, whose deadpan, understated portrayal of the family's accountant/doctor was a deeply unsettling prescence to share a room with.

Debts is a cool, fun, and inventive evening that is equal parts entertainment and experience. Audiences won't leave with new insight into the human condition or with their world view significantly changed; what they will gain is a story to tell, a night they won't forget, and an enormous appreciation for the ingenuity, passion, and incredible talent that crafted this rare piece of theatre.

ITSAZOO Productions' Debts runs until Nov. 3 at the Roedde House Museum. At the time of writing, only five performances still have 'seats' available.
Click here for tickets & information.