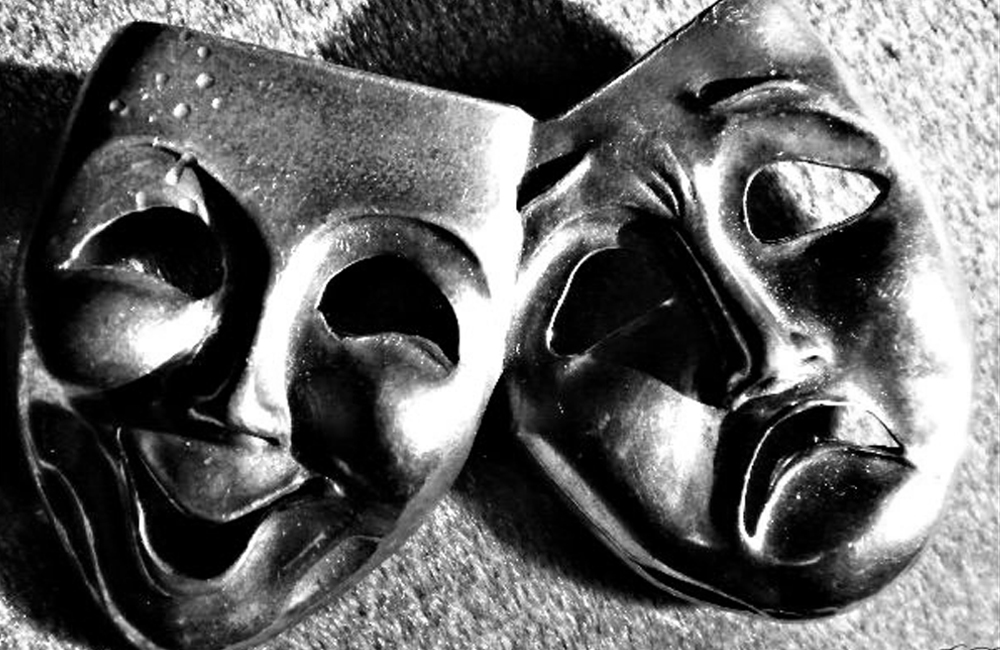 trag·e·dy – a play dealing with tragic events and having an unhappy ending, especially one concerning the downfall of the main character.

Tragedy and comedy go hand in hand, especially when one is talking about Ancient Greek drama. Significant to Greek culture, comedy and tragedy are two of the three dramatic genres to evolve from this period of flourishing art. An etymological double feature, these two words will be tracked back to their roots in Ancient Greek theatre, long before the realm of Hollywood romcoms and tearjerkers.

Comedy today is known to be any cinematic, theatrical, or life circumstance that has the ability to make us laugh – particularly defined as a light-hearted genre in pop culture. The word comedy in the past, however, was used to describe poems and stories with happy endings, a much more generalized approach to defining amusement.

From the marriage of two Greek words, komos and aoidos (meaning to revel and a singer or poet, respectively) came the compound noun komodios, a comedic poet. Developing over the ages, komodios became the word komoidia, which meant an amusing spectacle – one which made it’s way into Latin to create the word comoedia of the same definition. In the late 14th century, the French adopted the word into their vocabulary as comedie, providing a basis for modern spelling of the word.

Much like it’s comedic counter-word, tragedy came about from a compound word in ancient Greece. By combining the words tragos (a goat) and oide (a song), tragodia came to be. Literally translating to English as ‘goat song’, this word developed from satyric drama, the beginning stages of tragedy where in which it’s actors would cloak themselves in goatskins to represent satyrs. Tragodia in Greek, however, meant ‘a dramatic poem or play having an unhappy resolution’.

Moving through history, Latin vocabulary picked up the word and altered it to tragedia, which in turn was stolen by the French and transformed into tragedie. Soon adopted into the English Language, this is the likely – though not entirely certain – explanation to the origination of the word tragedy.