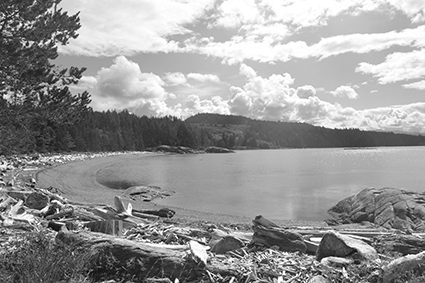 How I Spent My Summer Vacation: Jesse Tanaka

LMPR is throwing it back to that perennial school day assignment of, “How I Spent My Summer Vacation.” In the third post of a three part series Senior Digital Coordinator, Jesse Tanaka, looks back on his kayak trip to Nelson Island.

In early summer, my girlfriend and I borrowed a few kayaks and paddled out from Pender Harbour across to Nelson Island on BC’s Sunshine Coast. I had only ever been in a kayak a few times, so the goal was just to make it across without falling in or getting lost.

We got a tip from a friend about the location of Harry Robert’s cabin, built in 1929 by one of the early Europeans in the area. We attempted to track it down, but as beginner ocean navigators, had no expectation of actually finding it.

After a full day of paddling, and just before we were about to settle for any campsite, we came across the old log structure in the distance.

We tied up the boats and unloaded our gear just as the rain rolled in.

A view of the log work inside, there are much worse places to take shelter.

…and this to the north.

A short walk into the woods revealed an even older cabin.

We got a few beach fires in before the ban.

It was quite possibly the best campsite I will ever have.