Bill Reid Gallery: To Speak With a Golden Voice 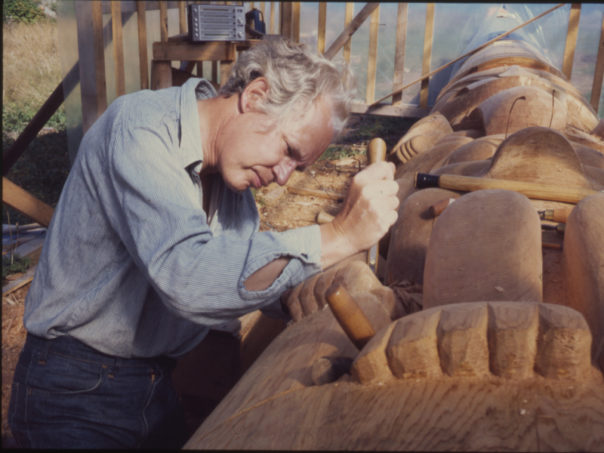 VANCOUVER, BC — Bill Reid Gallery of Northwest Coast Art celebrates the milestone centennial birthday of Bill Reid (1920–1998) with an exhibition about his life and legacy, To Speak With a Golden Voice, from April 22–October 4, 2020. Guest curated by Gwaai Edenshaw — considered to be Reid’s last apprentice — the group exhibition includes rarely seen treasures by Reid and works from artists such as Robert Davidson and Beau Dick. Tracing the iconic Haida artist’s lasting influence, two new artworks by contemporary artist and carver Cori Savard (Haida) and singer-songwriter Kinnie Starr (Dutch/German/Mohawk/Irish) will be created for this anticipated exhibition.

“Bill Reid was a master goldsmith, sculptor, community activist, and mentor whose lasting legacy and influence has been cemented by his fusion of Haida traditions with his own modernist aesthetic,” says Edenshaw. “Just about every Northwest Coast artist working today has a connection or link to Reid. But before he became renowned for his artwork, he was a CBC radio announcer recognized for his memorable voice — in fact, one of Reid’s many Haida names is Kihlguulins, or ‘golden voice.’ His role as a public figure helped him become a pivotal force in the resurgence of Northwest Coast art, introducing the world to its importance and empowering generations of artists.”

Reid was born in Victoria, BC, to a Haida mother and an American father with Scottish-German roots. He began exploring his Haida heritage at the age of 23, starting a journey of discovery that would last a lifetime. He studied jewelry making while working at CBC in Toronto, but it wasn’t until a trip to Haida Gwaii in 1954 that his creative trajectory shifted irreversibly. His time on the island introduced him to the work of his great-great-uncle Charles Edenshaw (no relation to Gwaai Edenshaw), inspiring him to create new works out of his ancestor’s sketches. Reid became known for making exquisitely detailed pieces, which were eventually translated into larger formats as he moved into monumental carvings. Some of his most iconic works today include Chief of the Undersea World, The Spirit of Haida Gwaii, and Raven and the First Men.

To Speak With a Golden Voice will provide new insights into the nuanced facets and creative complexities of Reid’s life and legacy. The exhibition will follow four thematic threads, beginning with Voice, a look at Reid’s career at CBC and his prolific writings, including archival recordings of his thoughts on Northwest Coast art. Voice will be central to the exhibition, including audio narratives, literary excerpts, and a commissioned sound-based artwork by Kinnie Starr that incorporates Reid’s voice.

The second thread will be an examination of Reid’s creative journey, or Process, which was affected by the many colonial policies still in place during the 1950s when he began exploring his heritage. The exhibition will include rarely seen sketchbooks, drawings, paper maquettes, casting molds, and works in progress from private and public collections.

The third thread will be a study of Lineage, with works by Reid’s contemporaries and the successors who considered him an influence. Artists will include Robert Davidson, Beau Dick and Joe David, as well as others who never met Reid but found inspiration in his life and career. Carver Cori Savard will create a new work based on Reid’s deep-rooted impact on Indigenous and Haida art.

In the final thread of Legacy, Reid’s multi-faceted and occasionally controversial life will be given fresh perspective. Departing from the public persona and staid portrait of the artist, the exhibition will provide new insights through the voices and stories of those who personally knew him. Short films featuring interviews with George Rammell, Don Yeomans, Rick Adkins, Chief 7idansuu James Hart, and more will be on display.

The gallery will publish a new exhibition catalogue with essays by curator Edenshaw, Nika Collison, Martine Reid, and more. A weekend of special events on June 27–28, 2020, will include artist demonstrations, exhibition tours, drop-in activities, and cake — in addition to free admission.

About Bill Reid Gallery (billreidgallery.ca)
The Bill Reid Gallery of Northwest Coast Art is a public gallery nestled in the heart of downtown Vancouver. It is named after acclaimed Haida artist Bill Reid (1920–1998), a master goldsmith, carver, sculptor, writer, broadcaster, and spokesman.

The Bill Reid Gallery offers public programs including artist talks and artist-led workshops which provide a greater awareness and appreciation of Indigenous values and cultures. Find public programs at billreidgallery.ca.

The Bill Reid Gallery of Northwest Coast Art is an initiative of the Bill Reid Foundation. Established in 1999 as a non-profit charitable organization, the Foundation’s mission is to preserve the art and perpetuate the legacies of Bill Reid.